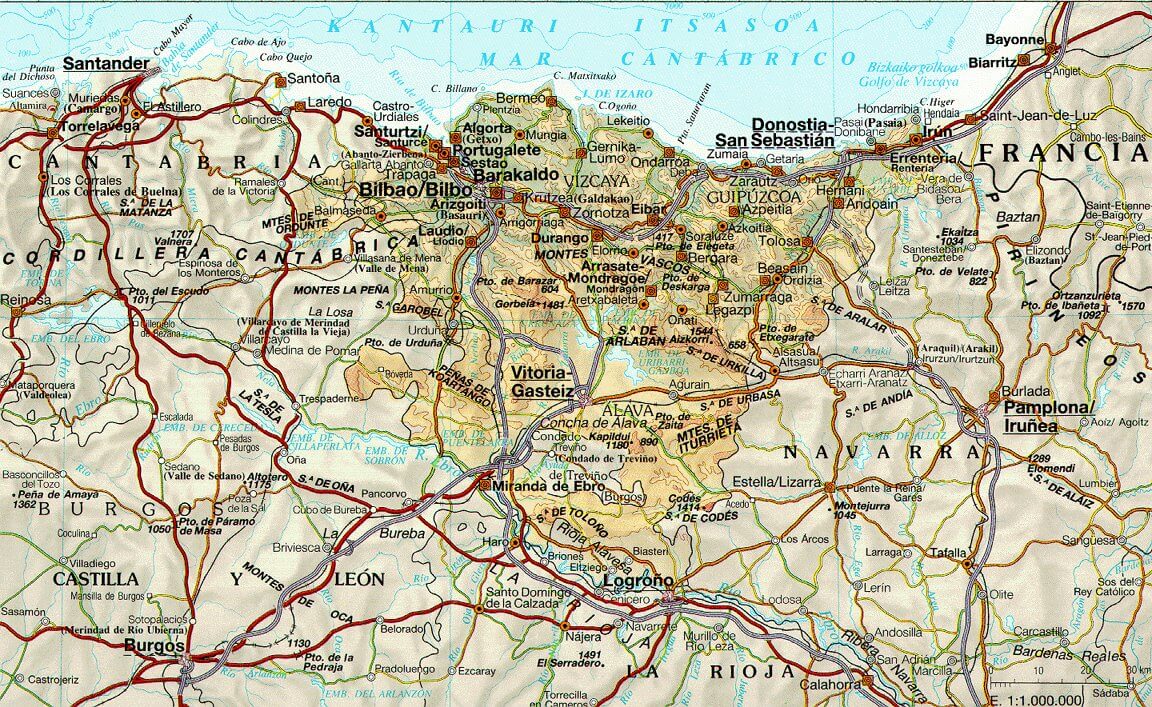 BASQUE COUNTRY – BETTING ON THE FUTURE

The Basque Country is a region of northern Spain and southern France that stands out especially for being a Spanish Autonomous Community recognized as a historical nationality by its Statute of Autonomy.

The evolution of its population has been spectacular and now represents more than 4.5% of the total population of Spain, going from just over 413 thousand inhabitants in 1857 to the figure of more than 2.1 million mentioned above. The following table shows the evolution of the population in the Basque Country with illustrative data from different periods of time.

The Basque Country is divided into three provinces, which are as follows:

Although these are the 3 official provinces, it is true that leaving the officiality aside and taking into account the regions that share the same culture, we would have to talk about Euskal Herria, which is a European cultural region located on both sides of the Pyrenees, a territory that belongs to the countries of Spain and France and is composed of 7 provinces:

Since 18 December 1979, the Basque Country has been governed by the Statute of Autonomy, which grants the Basque Country the capacity for self-government as an Autonomous Community. This legal framework, recognised in the Spanish Constitution, endorses its political and financial autonomy, as well as certain legislative and executive powers.

The Statute grants freedom in such essential aspects as taxation and fiscal matters, health, public safety, education and internal territorial organisation, which are some of the competences transferred between 1979 and 2011. However, there is still shared management with the State in certain matters, and others that have not been transferred, such as Penitentiary Legislation, Labour Legislation, Ports and Airports, Defence and Armed Forces, etc.

The governing bodies are the Parliament (Eusko Legebiltzarra), elected by universal suffrage, the president (lehendakari), elected by the Parliament, and the Government (Eusko Jaurlaritza), made up of the councillors appointed by the president. The seat of the governing bodies is Vitoria-Gasteiz. Parliament exercises legislative power and controls the actions of the Government. This, in turn, holds the executive and administrative functions, and answers to Parliament through the highest representative of the Government and the Autonomous Community: the Lehendakari or Basque President.

Originally from the Basque Country, the provincial councils (called foral councils or foru aldundiak) were extended to the rest of Spain after the Cadiz Constitution of 1812. In the Basque Country there is also another indigenous institution above the provincial councils, the Juntas Generales of each province, whose members are elected by the town councils. The Casa de Juntas in Gernika, where the General Assemblies of Biscay have always traditionally met, is particularly relevant.

For its proper self-government, the Autonomous Community of the Basque Country has defined an administrative structure, in which different autonomous bodies and public entities participate, and which is organized in different departments:

As for justice in the Basque Country, the High Court of Justice of the Basque Country is the highest judicial body in the Autonomous Community and is based in Bilbao. This Basque high court is divided into five chambers, which are as follows:

The Government Chamber is perhaps the most important and is made up of:

For its part, the Special Chamber deals with challenges made against the President, the Presidents of Chambers or of Provincial Courts.

The economy of the Basque Country is characterized by its industrial maturity, widely developed throughout the 20th century. So much so that, despite the serious problems arising from the crises and industrial restructuring of the 1970s and 1980s, the profile of the working population of this community can be identified with that of the most developed countries.

The industry is concentrated in Vizcaya, in the region of Gran Bilbao (Bilbo Haundi) and in the area of the middle course of the middle Ibaizabal river. In Guipúzcoa it is more dispersed throughout the province, although the belt around Donostia-San Sebastián has increased its proportion. In Alava, industry is practically centred around Vitoria-Gasteiz and in the Ayala Valley (Llodio-Amurrio). 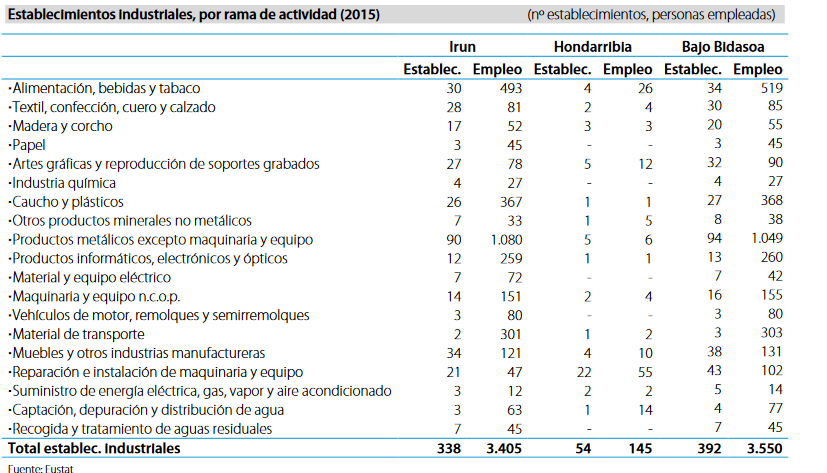 Tourism in the Basque Country (as in Spain) is very important and the number of tourists has been increasing in 2016 compared to the previous year during most months. One of the most visited provinces in the Basque Country is Guipúzcoa, which experienced its highest peak of visitor arrivals during the month of August 2016. In that month, 121,603 tourists arrived in Guipuzcoa in 2016 (compared to 117,003 the previous year). Of this number, 64,171 tourists were nationals and the remaining 57,432 were foreigners. Thus, what could be determined is that, year after year, the Basque Country is one of the places where most tourists come to Spain to discover all the places that this corner of Spain has to offer its visitors, as shown in this graph. 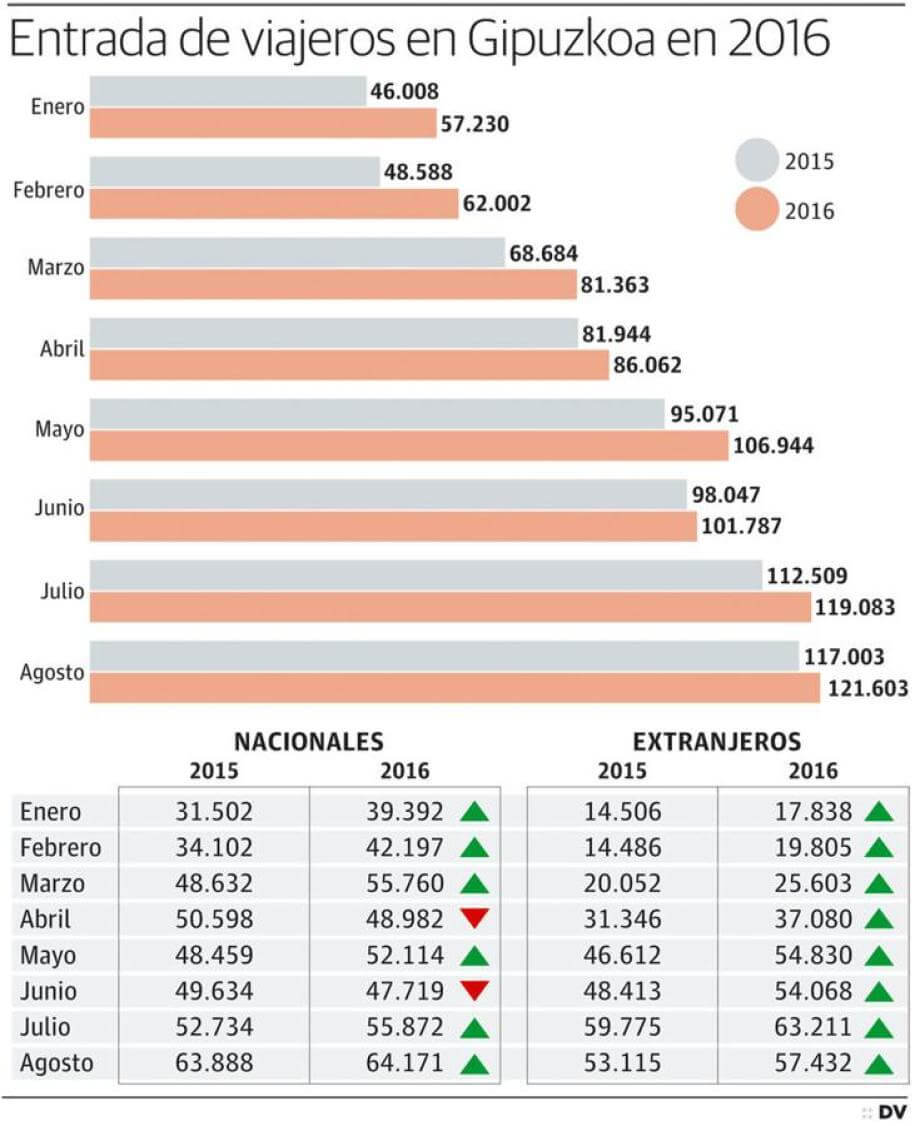 In Gipuzkoa, one of the most visited cities is Irun, which is a border town of the Basque Country with France, a country from which it is separated only by the river Bidasoa. Irún has 61,102 inhabitants and an area of more than 42 square kilometres. The importance of this city is due to its border location, which has made it become an important commercial, railway, road and logistics hub.

The most common way of getting around in Irun is by bus. More than 1.5 million people use the city’s urban buses every year, and to travel from Irun to Donostia, the bus is also one of the most common ways of doing so, as can be seen by the more than 529,000 users who use it year after year. And the train is also one of the main ways to get to Irun from Madrid and passing through Vitoria-Gasteiz, from where the Basque Country’s broad gauge network is centralized. EuskoTren is the favourite means of transport and, in 2015 (as can be seen in the following graph), it was a means of transport used by almost 2 million users. 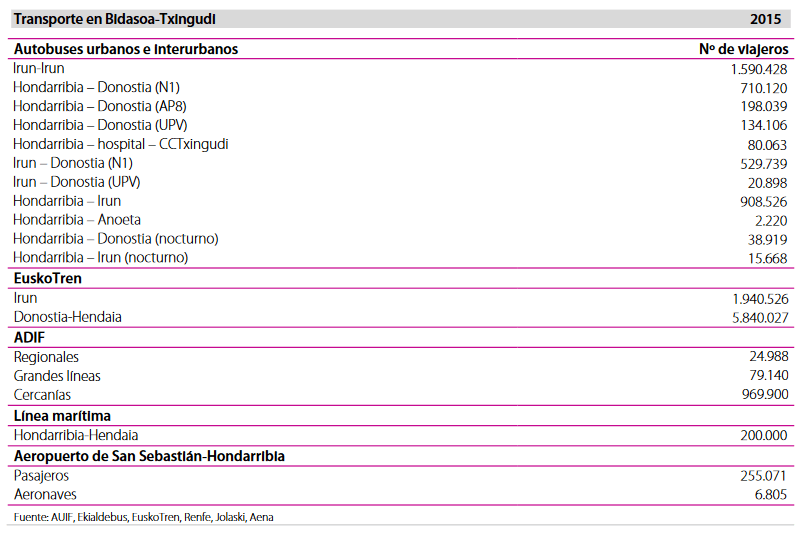 There are also three airports in the Basque Country: Sondika (Bilbao), Foronda (Vitoria-Gasteiz), both with national and international flights, and Hondarribia.

If we turn to the EPA to check the unemployment figures for the Basque Country, we see that it has an unemployment rate of 12.8% of the active population, a lower rate than the national rate, and that it is one of the Autonomous Communities with the lowest percentage of unemployment.

Its GDP is 65,924 million euros, which places it as the 5th economy of Spain by GDP volume. As for GDP per capita, which is a good indicator of quality of life, in the Basque Country in 2015 it was 30,459 euros, compared to 23,200 euros GDP per capita in Spain. This figure means that its inhabitants are among those with the best standard of living in Spain, as it occupies 2nd place in the ranking of GDP per capita of the Autonomous Communities.

In the following table you can see information about the economy of the Basque Country.